You are here: Home » Drivers » Convince or persuade? 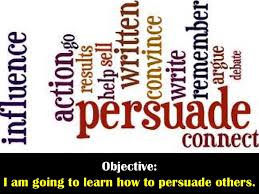 “Convinced” is for changing mental beliefs. Persuasion is change of belief followed by action.
Be convinced that these ideas are true and persuade your fellow writers, thinkers, and speakers of their correctness.
Know that the special functions of these words are obvious to marketers of products, for instance. She not only wants to convince the client of the benefits of the product, but she wants to persuade him to take action and buy it.
Convince yourself to get these words right. Persuasion is a process. A hoped-for result is to convince.
Here is another such example: She is convinced he is the right man for her to marry. No one persuaded her, but she is convinced.

(3) I persuaded her to go, but she wasn’t convinced it was the right thing to do.
(4) I found her argument persuasive but not convincing.

The lack of synonymy is illustrated by the impossibility of reversing the verbs:

(5) I convinced her to go, but she wasn’t persuaded it was the right thing to do.
(6) I found her argument convincing but not persuasive.

If you have been persuaded, then you have chosen to agree with those you previously disagreed with. In the latter case, it may not be so much that you’ve found an argument you agree with so much as you’re indulging someone who has appealed to you, either positively or negatively.

Prefer “convince” when the change of opinion must be definite or to emphasize the role of whomever did the convincing. Prefer “persuade” to draw attention to either the arguments used or the individuals doing the arguing, to emphasize reluctance on the part of the persuaded, or when you need the word to contain more vowels.

We are convinced by evidence or arguments made to the intellect

We are persuaded by appeals made to the will, moral sense or emotions.

I’d also add a further subtle distinction that we are convinced to think something; persuaded to think & do something.

The implication of this for marketing is significant. I couldn’t care less if you were convinced that my product or service is better than my competitors product or service if I haven’t also persuaded you to do something about it – buy it, support it, donate to it, tell your friends about it.

Want to join the discussion?
Feel free to contribute!